A date for your diaries:

Glenamaddy Gaa club will hold it's AGM on Friday December 13th @ 9.00 in the club meeting room.

best of luck to Willie  Comer, Michael Curtin and the minor panel  in the Minor League final against Clifden on Sat. 16th November @ 2.30 in Moycullen - your support appreciated
Posted by GlenamaddyGAA at 10:41 AM No comments:

Our Intermediate Team  drew with Williamstown in the 8th round of the league with both teams finishing with 0-11pts on the scoreboard. Glenamaddy Glinsk led 0-5 to 0-4 at half time but were unable to hold on to this marginal lead throughout the 2nd half.
We now have 1 game left to play against An Cheatru-Rua and at present have 9 points on the league table.
Team : Aidan Brennan, Willie Comer, Brian Curley, Parrick Conneally, Ben Conneally, John Keaveney, AAron Hynes, Tom Dowd, Aidan Geraghty 0-1, Michael Molloy 0-1, Sean Conneally, Michael Fox 0-3, Colm Killackey 0-4, Cormac Raftery, Luke Conneally.
Subs used :  Tomas Giblin 0-2, Barry Conneally, Kevin Morgan, Keith Davis  and Johnny Collins.


Our U15 team lost to Annaghdown in the league

Well done to our minor team on winning the North Minor B League by beating Caherlistrane 1-13 to 0-12 with our goal coming from Cathal Hynes. This was an exciting game of football which kept both sets of spectators on their toes. There were some excellent individual displays on the day from James Burke, Colm Fallon, Mark Dolan, Cathal Hynes and Cormac Haslam to mention a few. The Man of the Match award was presented to a worthy recepient Michael Fox.
Thanks to the management team of Michael Curtin and Willie Comer.
Team : Cormac Haslam, James Burke, Colm Fallon, Seamus Comer, Liam Glynn, Mark Dolan, Peter T keaveney, Ross Connolly, 0-1, Cormac Raftery, Stephen Glynn 0-2, Michael Fox 0-6 (3frees), David Ryan, Ryan McHugh 0-1, Cathal Hynes 1-2, Michael Geary 0-1.
subs used : Zac Conneally and Eddie Walsh.

Well done to our U12 boys in winning the Credit Union blitz on Friday evening. They played Dunmore, Michael Glaveys, and Williamstown in the final. Thanks to John Murphy from the Credit Union who presented the shield to the worthy winners. Thanks to the management team of Alphy o'Brien, Pat Geraghty, Kevin Duffy, Pat Collins and Gabriel Trayers and also to the ladies who did the catering on the evening.
Team : Ryan Keaveney, Darren Hegarthy, Odhran Geraghty, Adrian Divilly, Jonathan Whyte, Ryan Duffy, Luke Divilly, Conor Raftery, Eoin Collins, Gerard Smith, Eamonn Trayers, Morgan Neary, Evan Duffy, Thomas o'Brien, Thomas Collins, Jack Kelly, David Whyte, Patrick Fitzmaurice. The next outing for this team is  in the Creggs Harvest Festival.

Congratulations to out U15 boys who won the A North Board title by beating Annaghdown 0-13 to 2-6 in a very exciting final last Sunday. Annaghdown led 2-5 to 0-4 at half time having  played with the aid of a stiff breeze. In the 2nd half we dominated mid-field and every player played to their full potential throughout the game. We managed to level the game and in the last minute we got a free on the 25 m. line which full back Cormac Haslam slotted over  to leave us worthy winners eventually scoring  0-9 points to Annaghdown's 0-1 point in the 2nd half .
Thanks to the management team of Michael Curtin, Pat Geraghty, Pat Collins and Christy Dolan and to all who supported the team on the day. The cup was presented to worthy captain Mark Dolan by Coiste peile  na nog chairman P J Rabbitte. The team and supporters enjoyed some refreshments afterwards in the Oakland hotel.  Thanks to all who lit fires.
Panel : Danny o'Rourke, Niall Conneally, Cormac Haslam 0-1, Oisin Burke, Patrick Raftery, Michael Heneghan 0-4, Jason Connelly, Mark  Dolan Captain 0-4, Sean Raftery 0-1, Damien Smith, Mac Dara Geraghty, Alan Coyne , Thomas o'Toole 0-2, Jack Divilly 0-1, Darragh Keaveney, subs used : Odhran Geraghty, Conor Raftery, Eoin Collins, Matthew Curley.

to end of October

Congratulations to our U12 boys and the management team of Alphy o'Brien, Pat Collins, Kevin Duffy and Pat Geraghty on winning the Creggs Harvest Festival blitz beating St. Aidan's of Roscommon and Oran in the final.

Thanks to all who helped out with the church gate collection for the disabled drivers. Amount collected €293.49
Posted by GlenamaddyGAA at 4:21 PM No comments:

Well done to our U21 footballers who had a hard-earned victory over St. Kerrills in the U21 championship with a score of 1-11 to 0-8.  They play Headford on Sunday at 2.30pm at the  Glenamaddy ground.

Our U13 boys play Mountbellew Moylough on Sunday 24th February at 11am again at the Glenamaddy ground.

A great weekend of football - get along if you can!

N.B. Minor training every Friday 6.30 at the club ground.

There will be a GAA club meeting on Thurs Feb 28th 8.30pm in the meeting room at the clubhouse.


Sympathys -  The club wishes to sympathise with the Giblin family on the death of Tomas' grandmother Nora.
Posted by GlenamaddyGAA at 11:26 AM No comments:

Well  done to our U13 boys who had a comfortable victory over  St. Gabriels in the 1st rd of the league.   They play St. Brendans on Sunday Feb 17th @ 11am at  Glenamaddy GAA pitch.

Hard luck to our U21 team who lost to Milltown in the 1st rd of the championship . They led throughout the game up to the 2nd minute of injury time when Milltown got a late goal and seized a 1 point victory.
Next fixture:- v.  St. Gabriels on Saturday 16th February at Glenamaddy GAA ground at 2.30.
Posted by GlenamaddyGAA at 7:11 PM No comments:

The Club held its  AGM on Dec 16th in the GAA meeting room.
Chairman Michael Curtin in his opening address welcomed the sizeable attendance and said a prayer for present and former club members.  Michael thanked the various club officers, all those involved with teams and the players for their efforts in 2012. He expressed in his address how vast the role of the various club officers has become and that the amount of time required in these positions is increasing despite (or maybe because of!) the use of technology.
Secretary Mary Davis gave a comprehensive report of activities both on and off the field noting in particular the success at under age. She thanked Glenman Corporation our main sponsor who continue to support the club in all areas but especially financially. Mary also thanked all other sponsors and all who support and promote our lotto. She also thanked all who published notes during the year for the club; Fr. Mooney, Tuam Herald, Midwest Radio and Galway Bay FM.
Treasurer Kevin Duffy presented a detailed balance sheet and informed all present of the increasing cost of running the club on an annual basis. He thanked all for their support and expressed the need for some fund raising tasks to be taken in 2013. It was agreed that the cost of club membership for 2013 would remain the same as for 2012.
The election of officers then took place. The only change of personnel for 2013 were in the roles  of child protection officer and substance abuse officer. Michael Curtin  thanked the outgoing personnel  and welcomed Pat Geraghty as child protection officer and Kenneth Comer as substance abuse officer.
Michael Curtin chairman concluded the meeting by  wishing all members the best of health, and happiness in 2013 both on and off the field.
Posted by GlenamaddyGAA at 3:31 PM No comments:

With very best wishes to all our readers, from the committee and members of Glenamaddy GAA Club, for a joyous Christmas and a prosperous 2013 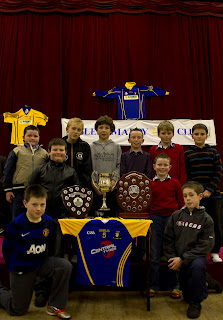 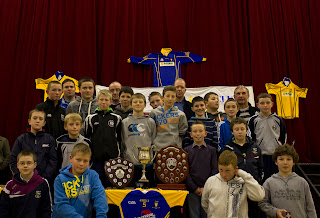 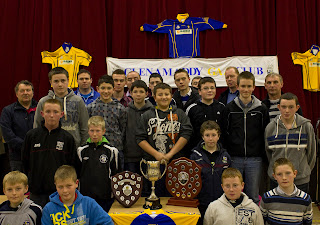 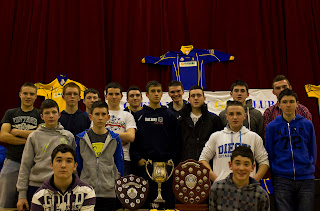 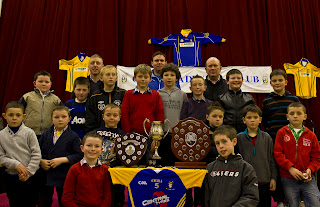 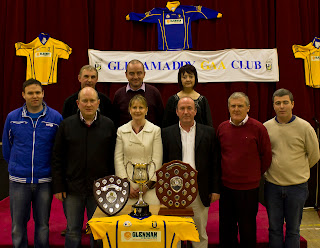 Posted by GlenamaddyGAA at 10:05 PM No comments:

Welcome to the blog of Glenamaddy GAA Club - here you can follow news of the club, upcoming events, results and anything of interest in GAA in Glenamaddy.